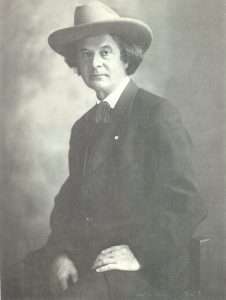 Established in 1897, the Roycroft Campus is the birthplace of the Arts & Crafts Movement in America. It remains the best preserved and most complete complex of buildings of the “guilds” that evolved in the United States at the turn of the 19th to 20th century. Author, lecturer, and entrepreneur, Elbert Hubbard, started the Campus by establishing the Roycroft Press, and would later evolve to include additional shops focused on the decorative arts.

Elbert Hubbard was born in 1856 in Bloomington, IL. As a teenager, Elbert traveled around the midwest as a soap-slinger for the Larkin Soap Company, ultimately bringing him to Buffalo. Elbert’s advertising genius helped Larkin to become the third largest mail-order company in the country. However, after 20 years in the business, Elbert became tired with corporate life, and started preparing his protégé Darwin Martin to take over. In 1892, Elbert left Larkin to follow his dream of becoming a writer.

In 1894 Elbert traveled to England to gain inspiration for his writings. He visited William Morris’ Kelmscott Press, which produced beautiful, ornate, hand-crafted books. Morris is considered the father of the Arts & Crafts Movement, which originated in England as a reaction against the Industrial Revolution and Victorian styles. The movement focused on improvement of societal ideals through the creation of high-quality, hand-crafted objects, and finding beauty and inspiration in the simplicity of nature. Elbert was very drawn to these concepts and returned home to East Aurora with the idea of following in Morris’ footsteps. 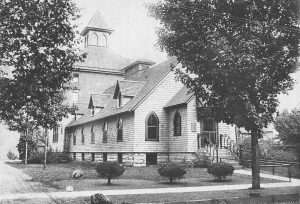 Elbert constructed a print shop next to his home on South Grove Street in East Aurora in 1897, called the Roycroft Print Shop. It is here that Elbert and his small staff began printing hand-crafted books, often filled with beautiful illuminations. In 1899, Elbert needed space filler for The Philistine magazine, and wrote a short story based on his interpretation of an event during the Spanish-American War, advocating that hard work leads to success. The story, which would later be titled A Message to Garcia, would propel Elbert to international fame, and would go on to become the third best-selling book at the time, behind only the Bible and the Dictionary attracting hundreds of visitors to East Aurora in the hopes of meeting Elbert.

The demand for a A Message to Garcia led to a need to expand the Roycroft Print Shop, and gave Elbert the financial ability to do so. Construction of a second, much larger Print Shop across the street was completed in 1901. Shortly thereafter, Elbert decided to transform his home, the first print shop, and a neighboring home into an Inn to accommodate his many guests. These projects would lead Elbert to the decorative arts, such as woodworking and coppersmithing as he tasked his employees with constructing the furnishings for both the Inn and his growing workspaces. Visitors to the Roycroft Campus loved these pieces and began buying them for their own homes, causing the Roycroft to expand, and at its peak, employ over 500 people. 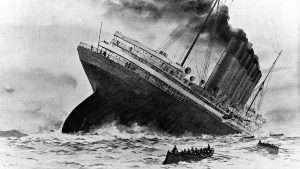 Sinking of the RMS Lusitania

In the spring of 1915, Elbert decided to travel to Europe to get a firsthand account of WWI for his writings. Elbert and his second wife Alice were killed on May 7th, 1915 after a U-boat torpedoed the ship they were traveling on – the RMS Lusitania. Elbert’s son, Elbert Hubbard II, also known as Bert, took control of the Roycroft after the death of his father. The Roycroft remained popular and prosperous throughout the 1920s, however the Arts & Crafts style was beginning to fall out of fashion. The collapse of the economy in 1929 accelerated this decline. By 1938, Bert could no longer make payroll and declared bankruptcy. The Roycroft Campus closed and the buildings were individually sold off for unrelated uses.

In the 1970s a revival movement began with the goal to restore the Roycroft legacy and Campus. In 1986 the Campus was granted National Historic Landmark status. Since then, extensive restoration work has been done on the Campus buildings to restore them to their former beauty, with uses more fitting to their historic past. The Roycroft buildings now hosts a variety of shops, a Museum, an Inn and restaurant (in its original location), and several artist studios. The Campus also offers a variety of classes, exhibitions, events, and tours. We hope you will visit and support the Roycroft Campus in our mission of preserving the legacy of Elbert Hubbard and the Roycrofters.